Inequality in the UK 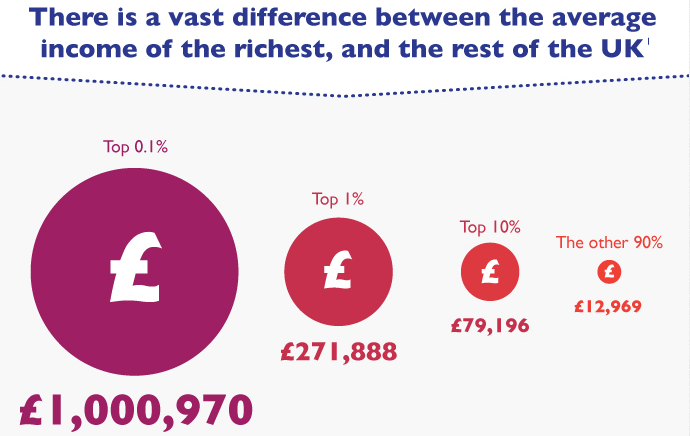 The Inequality Trust cites a number of factors which contribute to inequality such as globalisation and technological advancement. Campaigning organisations such as Positive Money point out that inequality is embedded in debt based money creation by the banks, while the New Economics Foundation cites a dysfunctional financial services sector that invests in complex financial products and property bubbles rather than the real economy.

Two of the factors cited by the Equality Trust, family and early childhood are also identified by right wing commentators as contributing to poor educational and employment. The difference however is that while the Equality Trust highlights structural inequality, the latter tend to emphasis culture: it is poor parenting, low aspirations and a culture of worklessness and welfare dependency that must be addressed.

In reality, attitudes, values and aspirations cannot be separated from the opportunities and life chances afforded by the material circumstances into which we are born. Can you really isolate poor parenting from low paid, part time work on zero hour contracts that barely cover high rent, poor quality accommodation? The struggle, stress and insecurity of such a lifestyle, inevitably affects all relationships but particularly those of family.

Up to half of the gap between what you and others make in society is accounted for by the family you grew up in. In the UK 50% of a parent’s pay advantage is passed on to their children. Whether or not you can start a business or own your own home depends in large part on access to family assets and social connections. In the UK, this inequality of wealth is being bolstered by increases in house prices increasing the wealth of property owners while diminishing the chances of others to buy their own property.

The home learning environment has the strongest single effect on educational outcomes for children at age 10. A poor HLE is associated with a low level of mother’s education, larger families and living in areas of higher deprivation. This further adds to the inheritability of inequality. The effects of primary school are also much more important for disadvantaged students than advantaged ones and later educational success is strongly influenced by your level of attainment at 11, underlying the importance of primary schools to reduce inequality.

Research highlighted by the Equality Trust suggests that global trade and immigration drive economic inequality by causing a wage decrease for those with a low level of education while causing a wage increase for others with a high level of education. However the effect of global trade on the wage distribution is substantially larger than the influence of immigration. Globalisation also increases the scope for tax avoidance which can increase financial fragility and inequality.

In a separate report by the Tax Justice Network, the degree of expanding global inequality through tax avoidance and evasion is far greater than any estimate captured by the Gini co-efficient and other measurements that necessarily rely on official government data . The report conservatively estimates off shore wealth between $21 trillion and $32 trillion of financial assets owned by High Net worth Individuals in tax havens (compare this to UK GDP for 2014 which was $3.06 trillion, for USA $17.42 trillion). These estimates do not include the value of real estate, art or jewels. Assertions about the ‘unaffordability of a welfare state’ for the UK or indeed any government simply do not bear scrutiny when compared to the staggering size of wealth extraction now taking place through tax evasion and avoidance.

Technological advancement is the explanation for income inequality proposed by orthodox economic thinking. Rapid technological change automates work once done by skilled trade jobs as well as low skilled workers, while increasing demand for high skilled new technology workers leads to higher pay.. In effect technology ‘hollows out the middle’ which leads to the observed increases in the number of high wage and low wage jobs as seen in the UK between 1975 and 1999. New Technology also makes possible the creation of new businesses with low start-up costs, employing few people but generating vast income. At the bottom end, technology has no effect on low skilled workers who do non routine work such as cleaning, care work and other service industry occupations.

The Equality Trust points to cross country analysis which suggests that democracy and trade unions help reduce economic inequality by increasing the number of stakeholders that people in power are responsible to, leading to policies which favour economic redistribution. Separate research suggests that electoral systems such as proportional representation also enhances the redistributive effect.

But this begs the question of why, in that case, economic inequality has increased over the last 30 years across industrialised countries with well-established democracies?

The Equality Trust highlights US research that suggests clear limits to economic redistribution with elected representatives more inclined to listen to the preferences of high and middle-income voters than low-income voters. Party donations and influential lobby groups that bolster the influence of a wealthy elite further widen the democratic deficit, as does low income voters’ lower propensity to vote.

The mechanisms by which inequality undermines democracy are explored by more recent IPPR research whose key finding is that 63% of poorer voters believe that democracy addresses their interests “badly” and is the basis for the widespread voter disengagement in recent times. Separate research that looks at political inequality and economic inequality in 24 democracies across Europe confirms the finding that greater economic inequality accelerates the political capture of the democratic process.

Research by the campaign group Positive Money clearly shows inequality as embedded in a dysfunctional system of money supply and creation based on debt: 97% of the money in today’s economy is created by banks in the form of loans to people and businesses – in effect digital I.O.U.’s used to buy goods and services with our credit card – while only 3% is in the form of paper money and coins created by the Bank of England. The common misconception, even taught in economic text books is that banks lend out deposits that savers place with them. Yet even the Bank of England has admitted that “Most of the money in circulation is created, not by the printing presses of the Bank of England, but by the commercial banks themselves….whenever they lend to someone in the economy….”

That is why while the total money in the UK is currently £2.1 trillion, the current debt is £2.4 trillion– the money owed plus interest. In effect we collectively ‘rent’ our money from the high street banks and for every pound of pound of money in the economy there will be a pound of debt plus interest owed.

This gross distortion of the economy is multiplied by the use to which such debt based money is put: around 31% goes to residential property which pushes up money supply faster than wages, a further 20% goes to commercial real estate (office buildings and other business property) and around 32% goes into financial products and services. Only 8% goes to the ‘real economy’ of non-financial businesses.

At the heart of this dysfunctional system is a self-serving financial sector which is both a driver and beneficiary of inequality. 60% of the rise in income share between 1998 and 2008 of the top decile accrued to finance workers while pay for lower and middle income earners stalled, resulting in increased household borrowing that encouraged the growth of the financial sector. Household debt alone now stands at a record level of £1.4 trillion – greater than the current national debt – with nearly nine million Britons going into debt just to cover their bills.